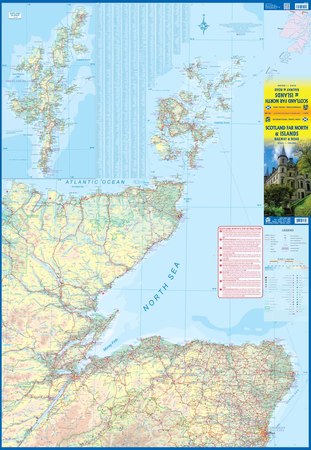 Great Britain, by its shape, is difficult to map. The population is dense, the road network intense, and the coastline convoluted. A map of the British Isles shows only the major features. Sectional maps of just England, or Just Wales, make little sense, due to the geographic shape of the island kingdom. Scotland also needs more than one map to show its treasures in sufficient detail. ITMB previously issued Scotland Central and South, and now extends its coverage at 1:300,000 to the sparsely-populated highlands and the isolated Western, Orkney, and Shetland island archipelagos that are usually shrunk to insignificance on most maps, as insets. This double-sided map covers the area from Loch Lochy south of Invergarry to John O’Groats in the north, and from the Western islands of Uist and Lewis to the Moray Firth and Craigellachie in the east. The second side has to duplicate part of the first side in order to extend the artwork further eastward to include Aberdeen and northward to include the wonderful island chains known collectively as the Shetlands and Orkneys. This map instills a sense of history, of adventure, and of being ‘off the beaten path’. It is the Islands and Highlands part of Scotland where Gaelic is still commonly spoken and castles abound, where one can lose oneself traversing single-lane roads across barren moors, or enjoy fishing villages such as Ullapool, or re-visit momentous events in history at Culloden. This is the heart of Scotland.