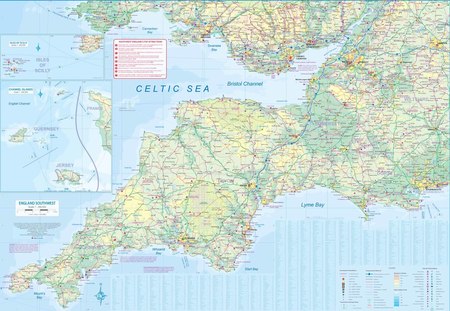 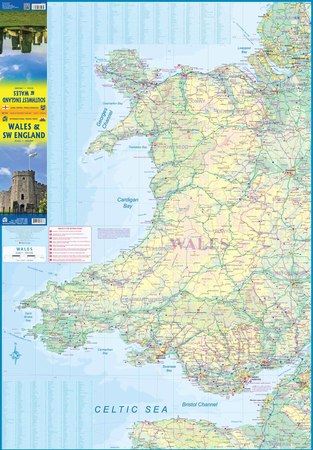 Finally, we have been able to create our own map of the lovely country of Wales. I use the word 'country' in its truest sense, as Wales was invaded and taken over by the English centuries ago. Regardless, the Welsh language and Welsh culture continue to flourish, although English is commonly spoken. We have visited Wales on several occasions and find that the attractions are so numerous that we could never see them all. There are too many castles to count, but some of the best preserved in the British Isles are in Wales, notable Caernarfon, but nearby Harlech is a World Heritage Site. St, David's must be one of the smallest and loveliest cathedrals in the world, and Tintern Abbey ruins among the most poignant anywhere. We took Johnny to Abergavenny for lunch in March, not that it made any difference; he just pined for a McDonalds. This map is double-sided, with Wales on one side and the West Country (southwest England) graces the other side. Excellent coverage of Cornwall, Devon, and Somerset is provided, along with a fair portion of Dorset and Wiltshire. The eastern extreme of the map is Salisbury/Swindon, so a lot of ground is still being covered. The peculiar way that motorways are designated means that 'true' motorways are shown in blue while equally good non-motorways are in green casing, with not a tinker's difference between them. My own favourite place is Mousehole, on Mount's Bay; Tintagel ranks a close second. The map is loaded with touristic attractions; both wll-known and more local. For something really unusual, visit Hay-on-Wye, west of Hereford. It is actually in England, smack on the border, and its claim ti fame is that it is the world's largest concentration of bookstores - an amazing place! This was obviously a fun mao to make, as it includes so many 'favorite' places. This map will be invaluable for anyone visiting Wales!