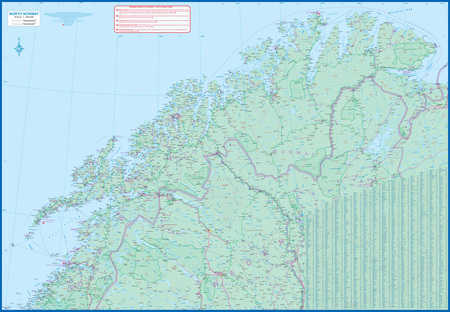 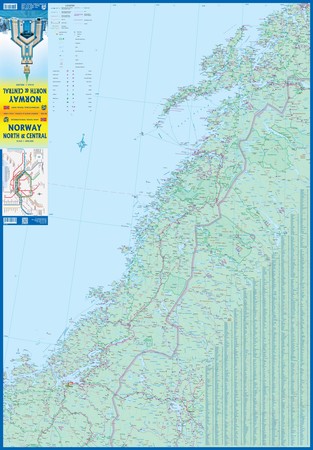 Norway is one of the more interesting countries in Europe for travellers, in that it has wide open spaces and unusual Arctic scenery, particularly in the north. Because it is a rather long and narrow country, trying to portray it adequately on a single sheet results in a lack of scale adequate for showing touristic attractions. This map covers the northern portion of the country, from Trondheim to Nordkapp and from the North Atlantic to the Russian border. It also shows a portion of northern Sweden and a bit of Finland and Russia, but its focus is on roads, rail connections, airports, distance markers, parks, and touristic attractions in the region. Most noticeably, the rail lines leading to Trondheim and north to Bodo are clearly shown. Communities, sometimes fairly small, are included, as are ferries to outlying islands close to the coast. The reverse side shows the rail line to Narvik coming in from Sweden, and all roads and towns north to the Arctic Ocean and east to the Russian border. Border crossing to Sweden/Finland are not shown, as both countries are part of the EU, but crossings to Russia are shown, albeit closed at the moment.