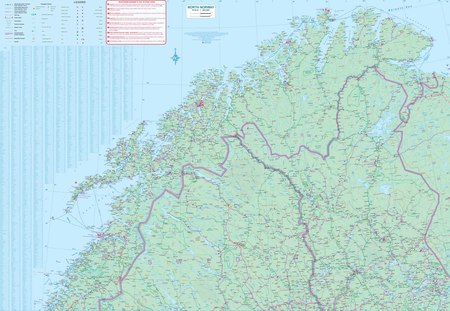 North of Norway exists one of the northernmost communities in the world, an archipelago of islands called Svalbard in Norwegian, and better known as Spitsbergen in English. Until now, it has only been available in map format from the Norwegian Arctic Institute, and then only with difficulty. Side one shows the various islands as an entity. There is only one town of any size in the islands, called Longyearbyen, although there is a more northerly town called Pyramiden and an isolated community on the west coast called Alesund. This is true high Arctic adventure travel; one does not come here unprepared! Most of the islands are uninhabited and largely ice-covered. Edge Island, for example, is a large nature reserve, and Prins Karl Forland is a national park. We have translated land area names into English and placed the Norwegian names in brackets, but have tried leaving the Norwegian names in place wherever possible to assist with local usage. This is one of those ‘off the beaten path’ type of travel destinations, such as appeal to Linblad Explorer ships. We actually include a list of Top Attractions! This is the most northerly land mass in the world, and Alesund is its most northerly urban area. The second side of the map is also uniquely interesting. It focuses on the far north of Norway, from Bodo all the way to Nordkapp and east to Norway’s border with Russia. Northernmost Sweden and Finland are included as well, but the map really emphasizes how large Norway is. Rail lines, and there are some, are shown with a red/white line going as far as Narvik (from Sweden) and Bodo (from Oslo). This is a really exotic title, but one every map store should carry!