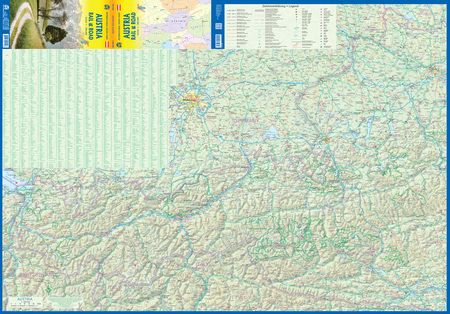 Austria is both an ancient country and a modern country. It was a powerful empire prior to the French Revolution (Marie Antoinette was an Austrian princess prior to her marriage to the king of France), and WW1 was strongly influenced by the Austro-Hungarian empire. The aftermath of that war resulted in Austria becoming much diminished in power, but despite WW2, its borders remain much as they were in 1918. That said, today's Austria is a lovely and safe place to visit. 75 years of peaceful neutrality has restored the country to prosperity and the country is loaded with picturesque villages, lovely mountain scenes, historic castles and palaces, wonderful churches, and museums galore. This map emphasizes the rail network that is the best way to travel around the country, but also shows motorways and ordinary highways, parks, scenic attractions, and connections to surrounding countries.