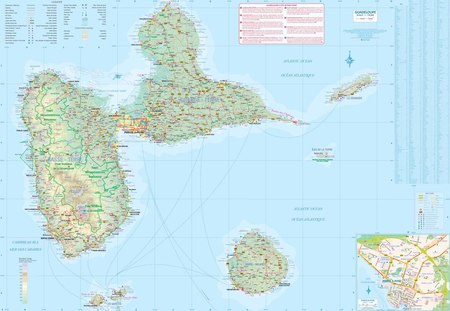 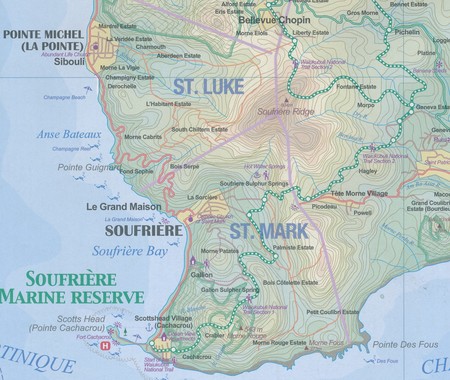 The country of Guadeloupe actually consists of six islands, with the main island being divided by a narrow peninsula into Basse-Terre and Grand-Terre. It is a French possession, so uses the Euro as its currency. The other touristic island is Marie-Galante, which one reaches by ferry from the capital city of Pointe-a-Pitre. The only airport is north of the capital, and touristic access is through it, or via the regular ferry from Dominica. Obviously, the lingua franca is French, and the towns have exotic-sounding names like Petites-Anses, Grand-Bourg, or Le Moule. Touristic resorts exist, but are scattered, unlike the complexes in Mexico. The road network is more basic, but reasonably comprehensive, and the significance of the country is that of a Caribbean European enclave combining the best of both continents. The other side of the map consists of a detailed map of Dominica, a popular cruise ship stop-over. The capital is Roseau, and an inset map is included. Beach resort enclaves exist south of the city, but what Dominica offers that varies from most other Caribbean islands is a well-developed network of inland resorts to explore the jungle-like mountainous parts of the island. Definitely a different travel experience!