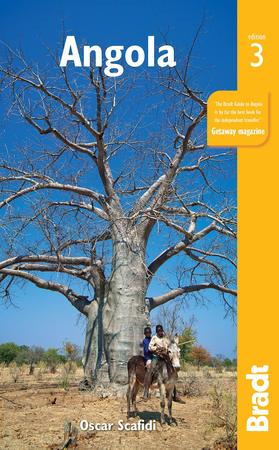 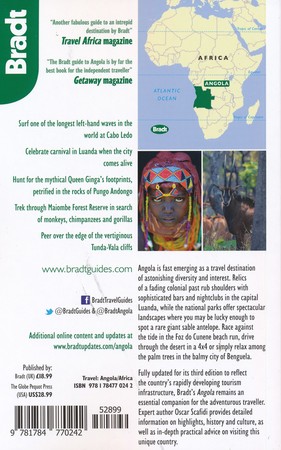 
This new third edition of Bradt's Angola remains the only dedicated English-language guide to this increasingly popular southern African nation. Thoroughly updated, it includes full practical and background information, everything you need to know about the capital city, Luanda, plus coverage of the rest of the country in 16 chapters. Also featured are 38 maps, including detailed city maps for all 18 provincial capitals, plus a specific section devoted to the sometimes-tricky process of applying for a visa.
Bradt's Angola is written by expert author Oscar Scafidi who lived and worked in Angola for five years, has travelled to all the country's provinces, and who has successfully completed a record-breaking kayak trip along the length of Angola's Kwanza River. Thanks to his knowledge, Bradt's Angola is ideal for everyone from independent surfers and bird-watchers on organised tours to fishing enthusiasts, conservationists, surfers, NGO workers and overlanders, not to mention adventurous travellers simply wanting to discover this intriguing country.
Angola continues to change at a rapid pace and offers everything from colonial Portuguese ruins to $100-a-plate sushi bars, landscaped waterfronts to grand public buildings, Portuguese and Brazilian heritage to frontier diamond towns, tropical rainforests to desert, and relaxed coastal resorts on 1,000km of unspoiled beaches. It's also the site of the UNESCO World Heritage listed Mbanza Kongo, once the centre of power for the Kilukeni dynasty, who founded the city almost 100 years before the arrival of the Portuguese.
Whether wildlife watcher or surfer, business traveller or pioneering adventurer, Bradt's Angola provides all the information you will need to get the most out of this vast country.
Specyfikacja