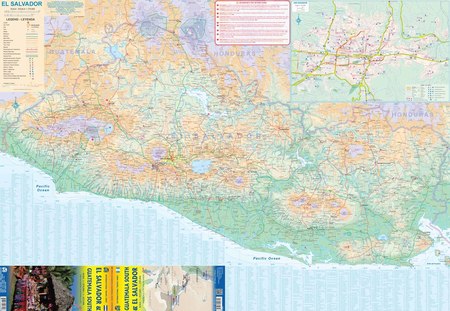 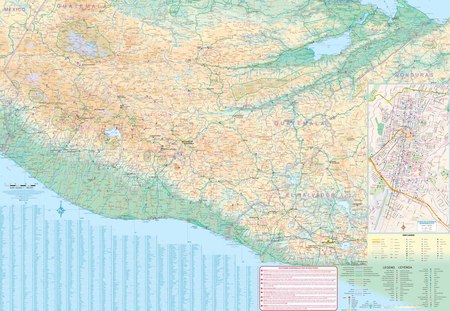 ITMB is pleased to re-introduce its map of the Central American country of El Salvador. This is a double-sided map with the country on one side, along with a detailed inset map of San Salvador. Largely overlooked by its larger neighbours, Salvador contains several old colonial Spanish towns dating back to the 1500s, such as Suchitoto (a hill town), Santa Ana (1708), Santa Tecla, , and La Palma. The country is also home to the Izalco Volcano, one of the youngest in the world (dating from 1770) and still very active, and El Imposible National Park. The map also shows the country’s World Heritage city of Chalchuapa, dating back 3,200 years. The other side of the sheet is a completely separate map of Southern Guatemala, being a detailed map of the central southern portion of this important country. The highlights shown on this map are Quetzaltenango (site of the battle in 1524 that added the territory to the growing Spanish empire), Antigua Guatemala (dating from 1690), and the Mayan ruins of Quirigua, dating from 200ad. The border crossings with El Salvador are clearly shown and are easily crossed. This makes a marvelous ‘combination’ map, providing information of interest for two interesting adjoining countries.