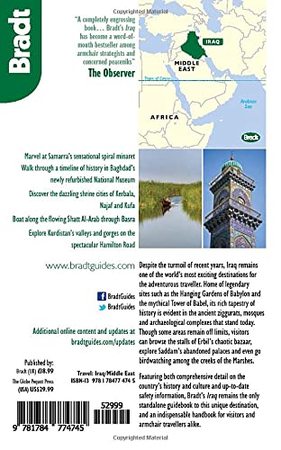 This thoroughly updated third edition of Bradt’s Iraq remains the only dedicated guide to this ancient land. Up-to-date travel information is included, plus all the necessary safety details. Ideal for both armchair and in-destination travel, it covers history, archaeology and culture, including iconic sites such as Babylon and Ur, the stunning architecture of the country’s mosques, the natural beauty and wildlife of the Marshes and beautiful Iraqi handicrafts. New for this edition are more archaeological sites in the south, including Telloh and Charax Sparinou, Alexander the Great’s port city. Muslim sites and festivals are covered, as is the influence of Shia Islam and the geo-politics of the region.
The modern development of Iraq is starting to look exciting and after years in which ancient sites have suffered destruction and neglect, archaeologists are now breaking new grounds and making new discoveries. Iraq’s rich and inspirational history is easily forgotten in the tragic turmoil of recent years. This is where writing began and where zero was introduced into mathematics. Although parts of the country remain off limits to tourists, there is plenty to see elsewhere, from Kurdistan’s capital, Erbil, one of the world’s oldest inhabited cities, to the dazzling shrines of Kerbala, Najaf and Kufa, ruins of ancient Mesopotamian cities, sites of recent US military history such as Fallujah, and the grave of Gertrude Bell, who explored, mapped and excavated the world of the Arabs and provided military intelligence for TE Lawrence’s military activities. You can visit the Tombs of the Iraqi Royal family and Ctesiphon, the largest free-standing brick archway in the world, see archaeological proof of the great flood, mentioned in the Bible and the Gilgamesh, and discover the treasures of the National Museum of Iraq.
The authors bring their considerable knowledge and understanding of Iraq to provide all the practical and background information needed for a successful trip. Advice on cultural awareness and religious sensitivity in the context of Iraqi history, along with where to get the latest information on which parts of the country you can still visit, make this an invaluable guide.

Born in High Wycombe and founder/Director of the Adventure companies Hann Overland and Hinterland Travel, Geoff Hann is an experienced overland traveller and adventurer. Since the mid-1960s he has travelled extensively in the Middle East and Asia taking many groups from London to Kathmandu. More recently he has led groups to Afghanistan, India, Pakistan and Iraq. His love of history and taste for exploring little-known routes has led him to travel extensively in Iraq, and during the Iraq-Iran conflict his groups were often the only travellers there.
Tina Townsend-Greaves was born in Huddersfield and worked for many years in the Civil Service before taking up her current role at Overgate Hospice, Elland. She has travelled very extensively throughout the Middle East and Afghanistan and has visited Iraq many times in recent years.
A lifelong enthusiast for learning, her degrees in Law and Security Management have often come in useful on her travels.