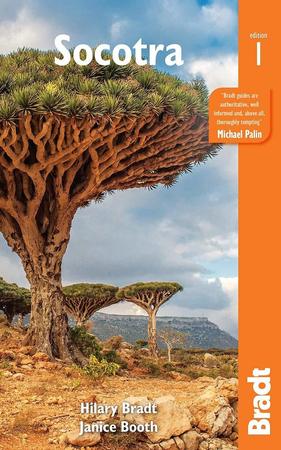 "A much-needed guidebook" - Tony Wheeler, founder, Lonely Planet
This new, full-colour title from Bradt is the first and only guide available to the largest of the four islands that make up the UNESCO World Heritage Site of the Socotra Archipelago in the Arabian Sea, 240 miles offshore from their mother land, Yemen. Everything you might need for a successful trip is covered, from pre-departure planning, getting there, tour operators and where to stay to the full range of information for making the most of your time while there. Background information on history, people, language and culture is followed by an easy-to-follow geographical breakdown covering everywhere from the capital Hadibo to Ayhaft Canyon National Park, Qaria Lagoon, Rosh Marine Protected Area, Homhil Reserv, Terbak village and Hoq cave, Qalansiyah, Diksam Plateau and the forest of Firhimin to name just a few of the places detailed. There is also a section on vocabulary, an endemic wildlife check list and suggested sources of further information.
Socotra is unique. Sometimes known as 'The Galapagos of the Indian Ocean', the archipelago has an exceptionally large number of endemic species. Of the 220 bird species recorded, 11 are endemic, including the relatively recently identified Socotra Buzzard. Closer to the ground, an estimated 307 plant species are endemic. More than 600 species of insects, some 100 land and freshwater molluscs, around 80 arachnids, some dozen myriapods, four land- and fresh-water crabs, 30 reptiles and 14 mammals have been found to occur, of which all the land snails, 90% of the reptiles and about 60% of the spiders are unique to the archipelago.
With its superb beaches and dramatically varied landscapes (mountains, forest, ravines, sand-dunes, beaches, caves.) Socotra is a prime target for tourism, which will need handling with extreme care. Strict regulations are in force to preserve the island's natural heritage and much of it has protected status, but some unprotected land has already been sold to potential developers. This pristine and relatively unknown little island, so full of natural treasures, may be on the brink of a very different future.
Specyfikacja
Zapisz