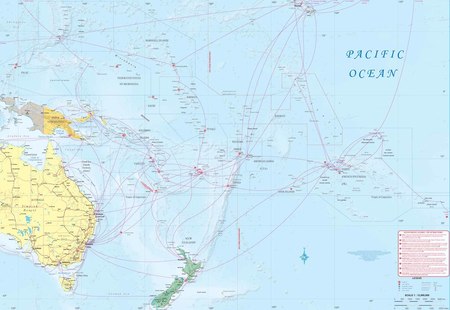 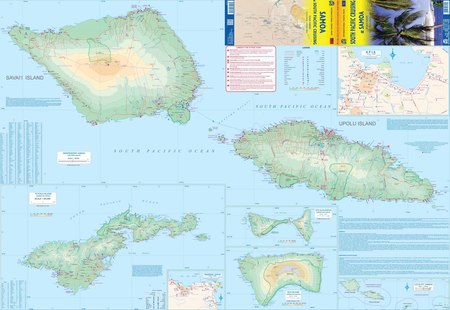 This is a new venture for ITMB. Cruising is a rapidly-growing segment of the travel industry, experiencing double-digit growth rates annually. Obviously, this is a thriving market. In conjunction with several cruise ship lines, we have prepared a map of the South Pacific Ocean, which extends southwards from Hawai'i to the southern tip of New Zealand and eastwards from central Australia/Papua New Guinea to the Pitcairn Islands. Thus, it does not include the popular South East Asia and China coast routes. We think this has to change at a time when 25,000,000 people are travelling by cruise ships. At the same time, we must keep coverage area relevant for those end users of the artwork. Even at 1:12M, most of the area covered is water, with island countries such as Fiji, Tonga, Kiribati, Tahiti, and the Cook Islands being visible, but without details. For those readers more familiar with Caribbean or Mediterranean cruising, the reason our focus on the South Pacific is due to the fact that this region of the world is the fastest-growing portion of cruise travel growth. The map of the South Pacific region fills one side of the map. The cruise routes at the moment are shown with red dashed lines. As several lines use the same routes, we have not designated the names of actively-operating lines. The ocean area includes hill shading for the deep trenches of the Pacific Ocean. By doing so, the blue of the water areas is softened by the grey of deep trenches. ITMB intends to prepare other cruising titles in the future. The reverse side of the artwork covers the two entities known collectively as Samoa, which has been included for two reasons. First, it is in the centre of the South Pacific and several cruise companies stop at Pago Pago. Second, the two Somoas form a unit that two main islands and two small islands, which have been portrayed at 1:160,000 scale. An inset map of the capital, Apia is included. American Samoa is one the those areas of the USA acquired during its expansion during the colonial era (Cuba, Hawai'i, Philippines, Puerto Rico, and Virgin Islands being other examples). The overseas territory, as the Americans prefer to call it, consists of half a dozen islands that are rather far apart from each other. The main urban area is Fagatogo in Pago Pago harbour on the only island with an airport, Tutuila. The residents are American citizens, but cannot vote, as in Puerto Rico and the US Virgin Islands, as it is a 'territory' and not a state.