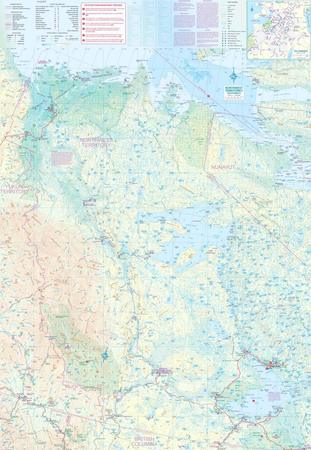 Technically, this is a new map, but in reality it is our map of the Yukon, which has been combined with our map of the Northwest Territories. The reason for combining related mapping areas is well-understood; it makes sense. Canada’s northland is far too vast and far too disparate to show on any map and make sense for those trying to use the map to get around. Starting with Yukon (NB: not “the” Yukon, please), this portion of NWT was carved out into its own territory a century ago, as a result of the gold rush to the Klondike. It is the same map we’ve done since 1989, updated whenever necessary and includes inset maps of Whitehorse (the capital), Dawson City, and Watson Lake. It is still a territory, not a full province, although essentially self-administering. The federal government has just announced a massive infrastructure improvement program to extend and improve roads, but these will take many years to complete. The NWT side of the sheet shows the brand new all-season gravel road to Tuktoyaktuk on the Arctic Ocean, opening up this part of Canada for land travel for the first time. Much of this roadway had to be built on top of frozen tundra and be built in such a way as to not interfere with cariboo migrations, so was not only a major engineering feat but was designed to minimize environmental disruption. An inset map of Yellowknife (the capital) is included.