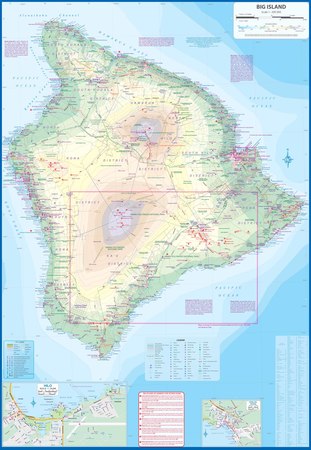 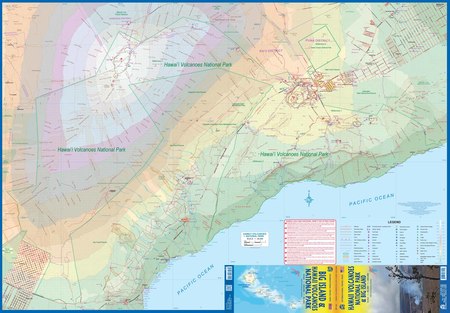 We didn't suspect, when we started developing this title, that Mauna Loa Volcano would erupt as soon as our map of the national park was printed, but it did! It is on the news every night, and a marvelous touristic attraction. How many of us can ever see a massive eruption of molten lava? Now, we can! (at least, from a safe distance). The national park occupies one side of the map and is the latest in ITMB's series of national parks. By the nature of such parks, we show all the features and elevations, but in this case, we'll add the proviso that heights and lava flows are changing the landscape on a daily basis. Volcanoes are sort of like elephants-they go where they please! The reverse side of the sheet is a map of Big Island, where the park is located. Its name comes from being the largest island in area of all the Hawaiian archipelago. The map includes an inset of Hilo, the largest city on the island, located on a calm bay of the east coast, and a separate inset of Kailua-Kona on the west coast, which is also the focal point for surfing and resorts. This pretty much completes our detailed mapping of Hawaii; in addition to this title, we have maps of the complete state and of each major island, as well as a new map of Honolulu/Waikiki. The map is printed on waterproof stone paper, which could prove very useful in tropical Hawaii!