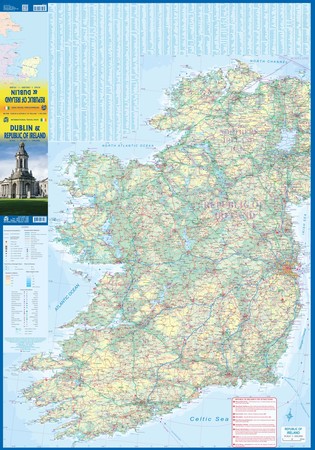 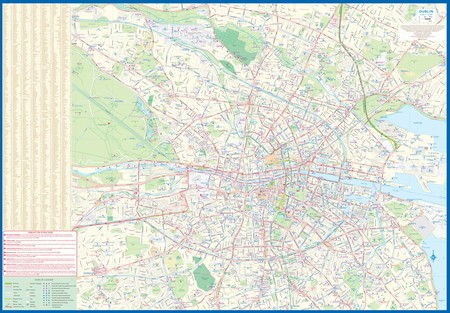 We are pleased to present our most recent edition of Dublin, combined with a map of Ireland on the reverse side. The cover notes the Republic of Ireland, which is the focus of attention, but most of Northern Ireland (Belfast area excluded) shows as well. Regardless, one side of the sheet is a detailed map of Dublin, the capital of the Republic and a very popular travel destination. The coverage goes far beyond the norm, extending from the River Tolka in the north to south of the Grand Canal, and from Phoenix Park in the west as far east as the Dublin Bay. The River Liffey, of course, flows across the centre of the page. Dublin has two rapid-transit tram lines, both of which are prominently shown, as is the city centre, all parks, as many hotels as we could find, shopping areas and restaurants, theatres and educational institutions, embassies, the ferry terminal, and much more.The Top Attractions are also noted. The other side of the sheet presents a very detailed travel map of the Republic, showing all motorways, highways, and secondary routes, as well as rail lines. Touristic attractions, such as Blarney Castle and the Rock of Cashel are highlighted. This would be an excellent map for those touring the Republic by road.