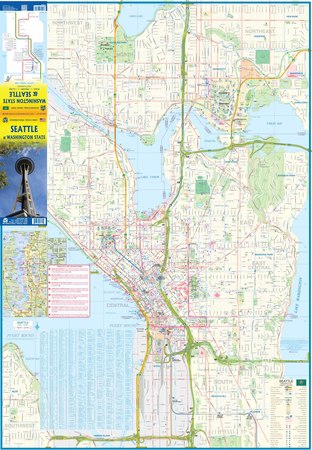 3rd Edition on waterproof paper. This is a new tittle for ITMB, in that it is the first time we have mapped the State of Washington. The actual area of the map includes Portland and northern Oregon and Vancouver and the border area with the USA. A small portion of Idaho is also shown. Wilderness campsites, parks such as Rainier, Olympic, and Baker, are shown. Seattle as a city, stretches far beyond the confines of a practical map in that it stretches from Everett to Tacoma. Our map covers from the University in the north to the Beacon hill neighbourhood in the south and from the waterfront to Lake Washington. An inset map of the greater region is included. The rapid transit line is also included on the map and on the back cover. The reverse side of the sheet shows all the roads of Washington State in excellent Olympic, and Baker, state parks, touristic sites, beaches, ferry routes, native reserves, motorways, and even the ill-fated Hanford nuclear site are included. The map is printed on ITM waterproof paper for durability.