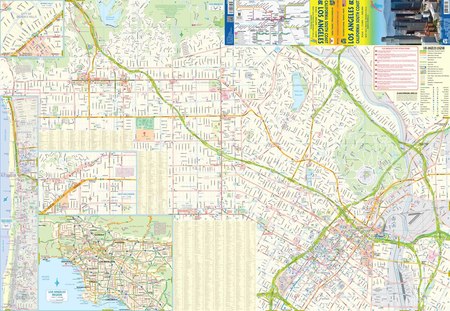 This updated version of one of America's great urban areas adds a brand new feature, the city's Top Attractions. Universal and Paramount Studios top the list, but the Hollywood Walk of Fame is probably more visited than any other sidewalk on the planet. The Santa Monica Pier and its nearby Route 66 information office are great attractions, as is Sunset Boulevard. The reverse side of the sheet covers southern California from the Mexican border north to San Francisco and east to Palm Springs noting, as usual, touristic sites such as the routes followed by Route 66, the Big Sur drive along the coast, Yosemite, and all the north-south highways from Tijuana to Sacramento. By using this one map, the buyer covers everything he'd want to see in LA and also has a map that covers driving routes for hundreds of miles.
Specyfikacja