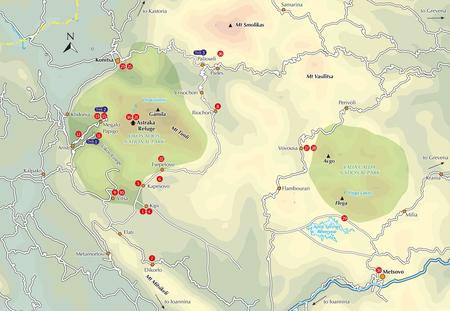 Walking and Trekking in the Zagori

Zagori in Greece's Northern Pindos National Park is among the last relatively undiscovered and unspoilt hiking destinations in Europe. This guide presents a selection of thirty walks and three short treks showcasing the region's captivating scenery, from dramatic gorges to mystical forests, crystal-clear turquoise rivers, rugged alpine peaks and characterful mountain villages. Routes vary from easy walks on clear paths to strenuous ascents and mountain traverses, meaning that there is something to suit most ambitions and abilities.

Clear mapping accompanies the route description, and the introduction to the guide covers all the practicalities, including getting to Zagori, accommodation, equipment, maps and safety. There is also a wealth of information about the region's rich history, architecture, geology, plants and wildlife, as well as fascinating notes on points of interest encountered on route.

The routes are presented in five chapters, covering Central Zagori, Vikos Gorge and vicinity, Mt Timfi, Konitsa and Mt Smolikas, and Valia Calda National Park and Metsovo, with highlights including Mt Timfi and Mt Smolikas (Greece's second highest mountain), the breathtaking Vikos Gorge, traditional stone arch bridges and the alpine tarns of Drakolimni (Dragonlakes). With so much stunning scenery, this is a region that cries out to be explored.