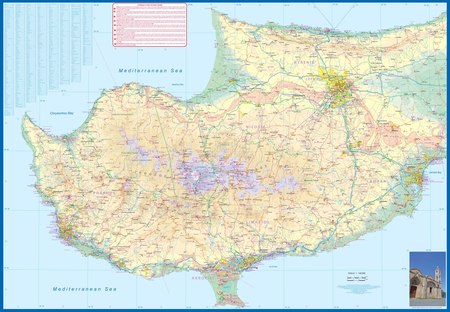 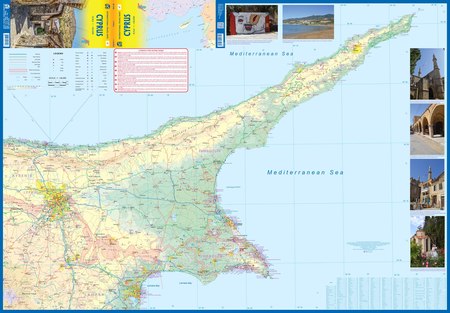 1st Edition 2021 on waterproof paper Cyprus is a lovely Mediterranean island; a popular touriest destination for Europeans. It is also a very historic island, with roots going back to Phoenician times and probably before. Politically, the island is divided into Turkish-controlled Northern Cyprus and EU-member Cyprus, the southern two-thirds of the island. Most travel is to the southern portion, with numerous resort hotels and beaches lining the coast. This is also the most economically-developed part of the island, as the northern portion has not been recognized by anyone except Turkey, which still maintain a significant military presence in areas they control. It is possible for tourists to pass through the 'green zone' in Nicosia from south to north and back safely and efficiently. The north portion is, in my opinion, more interesting simply because it is less travelled. When we were visiting the island to research it. We spent most of our time driving mountainous roads, discovering interesting villages (and occasionally, military outposts), but we never felt fearful or were harassed by anyone. To me, the most fascinating part of the island was the very contentious Famagusta city area right on the border that is now an abandoned city covering many blocks of high-rises. We were able to drive through quite a bit of it before being waved off by Turkish soldiers. Regardless of politics, the islands is a dream resort for anyone. We have tried to be fiar to both sides of this divided island; a wonderful place to exprolore or enjoy on a beach - North or South!