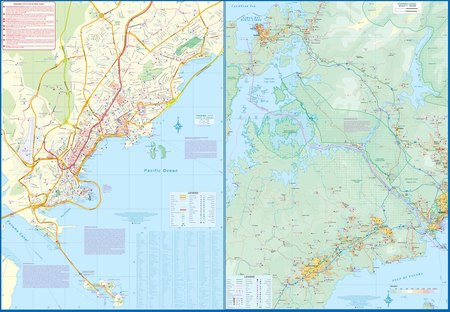 
One of the world's great travel adventures is sailing through the Panama Canal, which we did last year (see cover photo). Panama itself is a large enough country that the canal, which is visited annually by millions of passengers, cannot be shown in meaningful detail. So, whether one is on board one of the many cruise ships squeezing into the Miraflores Locks or are a visitor ashore watching, the canal is a great attraction. The map is double-sided, with central Panama (the part most visited) filling side one. Side two is divided in half along the central fold. A very detailed map of Panama City fills the left side, and the first-ever map of the canal itself fills the other. This is a marvelously portrayed rendition of the most important canal in the world. Even at this scale, the locks themselves are thin lines on the sheet, but they're there.