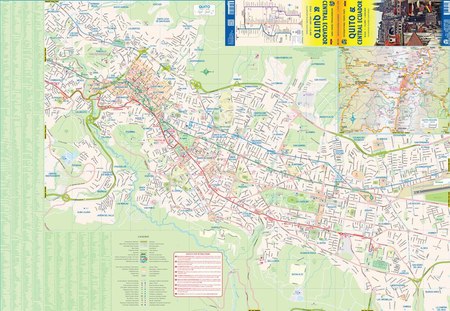 Opis przedmiotu
QUITO I ŚRODKOWY EKWADOR
WYSPY GALAPAGOS
mapa w skali 1:600 000 / 1:12 400
kanadyjskiego wydawnictwa ITMB Publishing
Finally, ITMB releases its long-awaited re-worked map of the wonderful South America city of Quito. The city is squeezed in between mountain ranges and, the entire city stretches from north (on the right-hand side of the map) to the south. The "bottom" of the map is, actually the eastern portion. A regional inset map clarifies the situation. The street network is clearly shown, along with the rapid line bus way and the city's Metro. The Old Town is perhaps the most interesting portion of the city for visitors and is on the left-hand portion of the map. The newer downtown is centered on La Carolina Park on the right-hand side of the map. This is where most of the shopping malls and hotels are located. The old airport is shown in part on the far right, but the new international airport is located far out of town. It is shown on the inset map. The reverse side of the sheet covers all of central Ecuador in a north-south format, from Ibarra in the north to Loja in the south and from Guayaquil in the west to the edge of the vast Amazon jungle. This side also includes inset maps of central Guayaquil and of Isla Santa Cruz. The road network is shown in excellent detail. The country has only one major north-south highway, the Pan-Americano and most of the population lives along the spine of the Andes Mountains. Most visitors combine a trip to Quito with a flight to the fascinating Galapagos Islands (see separate map), which can also be reached from Guayaquil. However, the World Heritage city of Cuenca, in the far south is a treat that should not be missed!
Specyfikacja