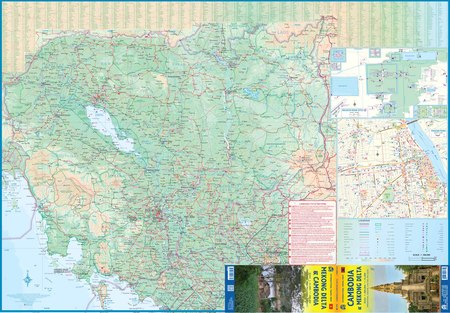 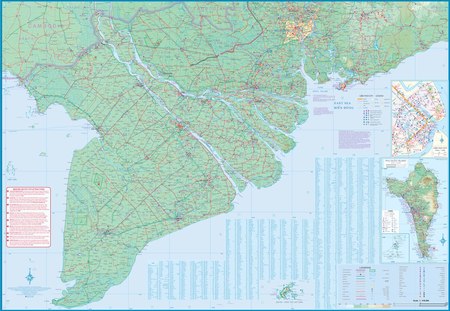 
Tourism to Cambodia is growing so quickly that we felt it necessary to bring back the country as its own map, instead of being combined with Laos. However, the entire country fits very nicely on one side of a map sheet, so we have combined it with neighboring Vietnam's Mekong Delta map. There are two treasures in Cambodia: the Angkor Wat complex of temples near Siem Riep, and the Capital of Phnom Penh. Cambodia became extremely destabilized by the Vietnam War in the 1960s, leading to a rebellion that placed the murderous Khmer Rouge in charge. This led to massive atrocities and de-populated all towns, killing millions. Siem Riep is a thriving touristic city, and UNESCO manages the Angkor complex very well. The capital has mostly recovered, but still retains the sleepy colonial atmosphere of the French era. River boats ply the Mekong River and transport visitors to Vietnam, where the river divides into nine mouths to flow into the ocean. That brings us to the second side of the map and the area known as the mekong Delta. This is a very useful map in its own right. The delta is extremly rich agricultural land with numerous canals carrying water to countless rice paddies. The map also provides a link between Phnom Penh and Saigon/HCM City, which has now grown to nine million people.