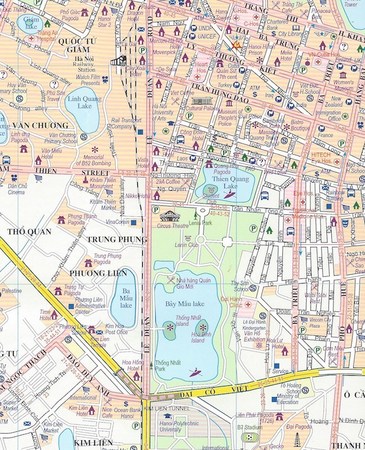 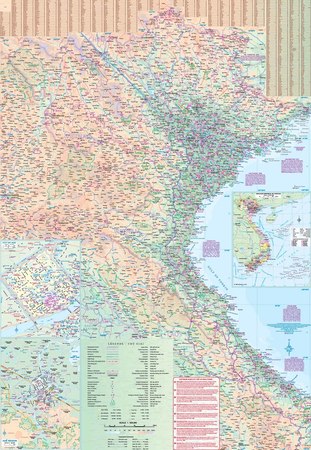 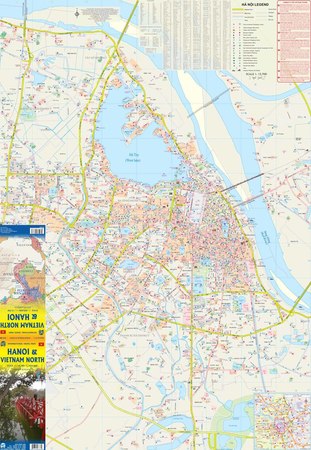 I first visited Hanoi in 1992, as an official guest of the government. That’s how I met Lan, who had been sent to the airport to greet me. The rest is history 22 visits to Hanoi later, I know the city fairly well, but every visit shows interesting changes. The bicycle culture has been replaced by the motorbike culture and the city’s population has risen to the five million mark. This edition focuses on the ‘old town’ area south of West Lake, and comprehensively catalogues newly-widened streets, major shopping areas, touristic sites, even bus stops. The map does not, unfortunately, show the new elevated rapid transit line, which was stalled for lack of financial resources when we did the research for this edition. We decided not to include it until it was finally completed, years behind schedule, so it will be on the next edition. As of March, 2019, it still wasn’t open, but looked as if progress was being made. The other side of the map is an excellent rendering of the hinterland surrounding Hanoi – Ha Long Bay, Sa Pa, the Chinese border, Vinh, and Hue. This is a much more detailed map to use for locating touristic attractions than the map of the entire country. As a last aside, please note the cover. There is a small grey-clad figure crossing the bridge to the temple on an island in Sword Lake. That’s Johnny, and that’s me trying to keep up with him. We really DO ground-truth our maps!