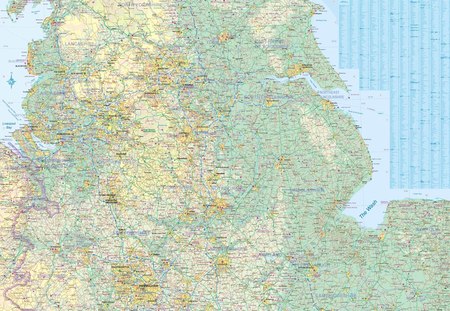 This is a new title for ITMB, and continues our expanded coverage of the United Kingdom. Many publishers carry a map of Great Britain (or of the UK), and a few might have one just for England and Wales. We travel extensively through Britain and usually find such maps too generalized for usability. All parts of the UK seem to be blessed with interesting places for a visitor to explore – parish churches, cathedrals, fortresses or castle ruins, market towns, lavish country estates, fabulous gardens, seaside resort towns – the list is endless. The only way to show tertiary-level roads leading to interesting tiny villages with fascinating names, and to portray the wealth of attractions available for the visitor is to divide the UK into logical units, which we did earlier with south East and South West England and now continue to the Scottish border with this map. Coverage is from Birmingham/Peterborough north to York on side one and from Lancaster north to the Scottish border at Berwick-upon-Tweed. As the border angles in a southwesterly angle, the map also includes much of the Scottish border region as far west as Dumfries. Being an area regularly serviced by rail (the world’s original railway line is on the map), we have emphasized rail connections for end users. However, we have also included roads for those driving or cycling.