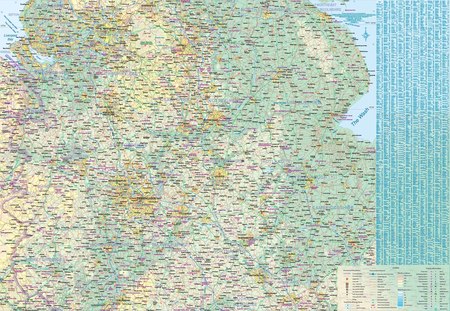 The shape of the UK makes it difficult to map logically. The term South East, within crowded England, is generally more restrictive than is appropriate for a map. Our definition of SE is from the English Channel north to the northern tip of East Anglia and west to Portsmouth/Reading/Peterborough. This occupies side one of the sheet. Side two consists of that complex portion of England generally called ‘The Midlands’ stretching from Cambridge/Peterborough west to the Welsh border and from Luton/Gloucester north to Manchester/Grimsby. London is, of course, prominent, but only as a main roads map. This is the most recent sectional map of the UK that ITMB has published, and was necessitated by the realization that, to see England properly, one needs a detailed enough map to show rail lines, motorways, A-type highways and B-type secondary roads, but also the tertiary level of road joining villages. The road network of England is incredibly complex and cannot be shown in proper detail without mapping at this scale or better. England also has a sophisticated rail network and this is left off most maps to avoid clutter. We have emphasized all the rail lines carrying passengers, which makes the London portion look like a spaghetti factory, but there are lines everywhere. All motorways and highways are shown, but rail lines are prominently shown, to encourage travel by train. A Top Attractions list has been included as well, but hundreds of interesting touristic sites have been included.