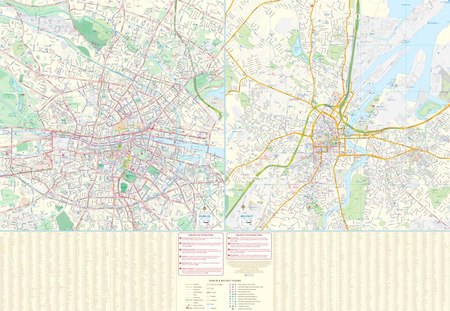 
Our approach has been to combine the island on one side with detailed city maps of Belfast and Dublin on the reverse side. The island of Eire is divided into two parts: Ulster, or Northern Ireland being part of the United Kingdom (Britain) and the larger southern portion forming the independent Republic of Ireland. Both portions have very interesting points of interest and as far as mapping goes, form one entity. The road network for the island is excellent, with motorways radiating out from Dublin and Belfast to ensure easy access to cities such as Cork, Waterford, or Portadown. Scenic A-level and secondary roads make driving a pleasure. Ireland is an island that evokes strong passions, and the largest tourism market is descendants of those who emigrated to various parts of the world. The reverse side of the sheet has two equally large inset maps, one of Dublin and the other of Belfast. Both are interesting cities. I prefer Belfast, but Dublin is prettier. Each city map covers a goodly portion of each city, not just the centre; Dublin, for example, is framed by the Grand Canal as much as by the River Liffey, and Belfast by its extensive pedestrian walkways. This is a map for the visitor wanting to spend a week touring the island. Everything is shown and, most importantly, it is on waterproof paper, so can be opened up and used as protection in case of rain. Did I mention that it rains a bit in Ireland?