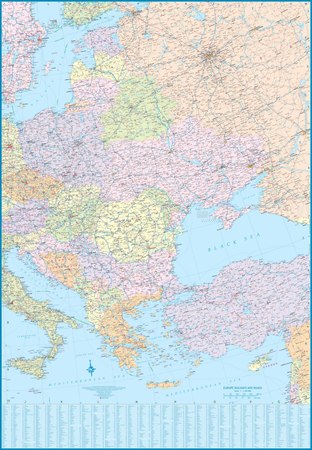 OUr Europe Rail Map has proven to be a best seller, so obviously meets a market demand. This most recent edition updates recent completions of the new 'fast train' network that is gradually transforming transportation of passengers in Europe. Much of this will consist of extensions to line already in place. We have included the east-west link through London, which is still under construction, but not the future line to Birmingham. In France, the western portion of the line to Caen is open, but not the link to Paris. The Spanish system is mostly in place and Italy is now completed as far south as Salerno. Connecting links betweeen countris is, however, mostly a future hope. The regular rail system is shown in black and is quite extensive. For the sake of convenience, the motorway and main road networks of Europe are included, but the strength of this map is its emphasis upon train travel. As an additional feture of this map, we have added a side panel that shows each country's flags, shows where it 'fits' into Europe, what its car decal designation is, its capital, its area, and its population.